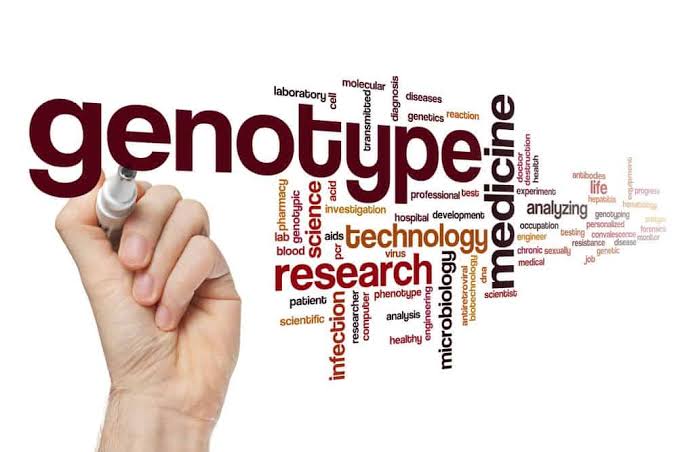 I’m here again with another critical topic, one I believe we don’t open up about or discuss detailed on, and what could this topic be? I bet you know already from the heading. Yes, it’s the genotype topic.

Is it not shocking and sad, how people bring up the discussion of genotype when it’s few weeks to marriage, or even after marriage. Well, that’s one side.

So I had a one on one conversation with a friend early this week, and we got talking about this entire unmatched genotype thing and how deep it has eaten in the lives of people and how it has destroyed people’s future.

As irrelevant as a lot of people believe this to be, I must tell you, it is one of the most important things.
So like I was saying, I had a conversation with a friend concerning this, and I saw it on her status at first, and I was moved to respond.

Of course, we were of different beliefs, and I would love to share with you our conversation, and please your opinion on this topic matters a lot cause, people need to be enlightened, so read through the discussion, and let us know your stance on the topic.

[9/22, 10:06 AM] Preshii🥰: I don’t get what you are saying. Are you saying people should get married regardless if their genotype doesn’t match
[9/22, 10:14 AM] Tunmzy: Yes boss
[9/22, 10:15 AM] Preshii🥰: I know how you actually feel about this, but I feel like you just want to hear people’s opinion.
[9/22, 10:17 AM] Tunmzy: Naaaa
[9/22, 10:18 AM] Tunmzy: The thing is it’s complicated. Yeah.
[9/22, 10:19 AM] Tunmzy: I’m telling you technology has gone beyond the doom they paint AS AS marriage to be
[9/22, 10:22 AM] Preshii🥰: Well I disagree 💯…….I believe there are over a billion people in the whole world of the opposite gender of which you can find half whose genotype would match yours, but you choose to settle all in the name of love, and cause a risk to your unborn children and your happiness, just because you think “you are in love” A lot of times, love is not enough. As they say, love is blind, and people who open their eyes to get married regardless, just chose to be blinded by love, and are just so caught up in the moment, that they aren’t thinking of the future.
[9/22, 10:23 AM] Tunmzy: But I am of the opinion that with the number of broken homes and broken marriages in Nigeria – it is a no brainer that many people don’t marry who they want to because people make it seems like AS AS marriage is the end of the world but it’s not.

If anyone is found the fetus can be aborted and save the child and the world from suffering
[9/22, 10:27 AM] Tunmzy: Speaking about the future.
Why are we breaking otherwise happy homes and forming terrible unions because “love is not enough”
[9/22, 10:30 AM] Tunmzy: Let me shock you.
Do you know that Down syndrome is a more serious problem in Nigeria than in SS
[9/22, 10:31 AM] Preshii🥰: No cap, Humans deal with risk every day, But risks are different from risk.
A risk that you knew the effect, and you could have avoided it and saved yourself a whole lot, saved your family a lot, and saved your future a lot but you didn’t because you felt you were happy with this person.
[9/22, 10:31 AM] Tunmzy: I’m not AS.
But I just hate how Nigerians paint the genotype thing
[9/22, 10:33 AM] Tunmzy: People in the past didn’t have access to this technology.
We do now. And there are ways forward
[9/22, 10:34 AM] Tunmzy: Exactly why this is necessary.
It’s possible they don’t even have any SS children
[9/22, 10:35 AM] Preshii🥰: Okay let’s leave that aside because you of all people know the ideology of Nigerians.
First of all, we are religious people, we believe in miracles, which exist by the way.
90% say no to abortion, as they consider it murder despite some people still doing it.
But you hardly hear a married woman aborted her child. People who do that are mostly people who have unwanted pregnancies.
The masses have this ideology, and no matter of lecture you give them would change it.
[9/22, 10:36 AM] Tunmzy: And it’s so simple. If your partner isn’t on the same level as you. Fine. You shouldn’t take the risk
So there should be understanding
[9/22, 10:36 AM] Tunmzy: Nigerians🤦🏼‍♀️
[9/22, 10:37 AM] Preshii🥰: It is, I know people who are. It wasn’t a choice, they just had to face the reality of it, don’t get me wrong. SS is a choice, you get to decide.
You either say I go for it or I don’t, after considering a lot of things, but most people don’t.
[9/22, 10:40 AM] Tunmzy: This is a conservative nonsense statement.
People have abortions for different reasons
[9/22, 10:40 AM] Tunmzy: Any woman that’s aborting to save a life (saving the baby from suffering) should be mentally okay
[9/22, 10:41 AM] Tunmzy: Both are risks yeah?
[9/22, 10:42 AM] Preshii🥰: Change comes with a lot of things. I feel if one wants to adapt to it, they would.
But then do you know that most people who get married without really caring about this genotype thingy are poor people, ones who aren’t exposed to the dangers, ones who don’t know the technologies put in place, ones with rigid beliefs, ones who don’t even have the access to these technologies.
It’s heartbreaking but it’s fact.
[9/22, 10:43 AM] Tunmzy: I know right. And I’m not talking about those people
[9/22, 10:44 AM] Tunmzy: I’m referring to enlightened people who see the genotype thing as a curse
[9/22, 10:45 AM] Preshii🥰: 😂😂😂….wawuuu.
You think I don’t know people who have abortions for different reasons.
My point is most abortions come from unwanted pregnancies, people who aren’t ready for motherhood.
[9/22, 10:48 AM] Tunmzy: These sets of people needs to be checked.
[9/22, 10:55 AM] Preshii🥰: Enlightened people know the risk and dangers, and they are smart enough to prevent it before the situation escalates, and they end up settling.
See I know people who have died from these dangers, For God’s sake. SS patients go through so much, especially at their peak, when they are just clocking 20. It’s a one-chance thing, most don’t survive it. At least down syndrome do, you think their crisis is a joke.
I can count the SS patients I know that are alive, the others are dead, their parents had a choice. (At least the ones that are enlightened did)
They trusted in the system, in the procedures, and it failed. We live in Nigeria, where they are failed systems. People fear abortion for the possibility that they might not have a womb to carry a child anymore.
It’s sad if you think abortion is the safest way. Abortion has its risks, and I’m very sure you are aware of it. Doctors don’t advise it, and that’s the truth, they tell you the dangers, and it’s left for the person to decide.
You know this right?
[9/22, 10:57 AM] Preshii🥰: They are.
[9/22, 11:00 AM] Preshii🥰: A lot of things need to be checked, people’s mindset, the system, the society, the world at large.
We live in a country where the system has failed us, so if the future of your family and your children are put in your hands and are tied to a decision, then I plead that people make the right one, and not rely on the system.
[9/22, 11:00 AM] Preshii🥰: It’s been a good talk, Tunmise.
[9/22, 11:10 AM] Preshii🥰: Do you mind, I would love to share our discussion on my blog, will turn it into a post, and people get to read, be enlightened about the procedures you said are put in place, get knowledge and air their opinions.
What do you say? Game?
[9/22, 11:48 AM] Tunmzy: No problem

I would love to let you know that there are 2 sides to this. We have people of the opinion that Life is a risk on its own and it doesn’t matter if they are both AS, they can get married, and it’s appalling the way Nigeria has stereotyped AS-AS marriage.

There is another side that is saying, it has not been overemphasized than it is, and that it’s a glaring red meaning danger, and that it’s better to avoid yourself, family, and future all that drama, and get married to someone whose genotype matches yours.

Well, these are the 2 sides. what is your viewpoint? Please let us know in the comments section below.