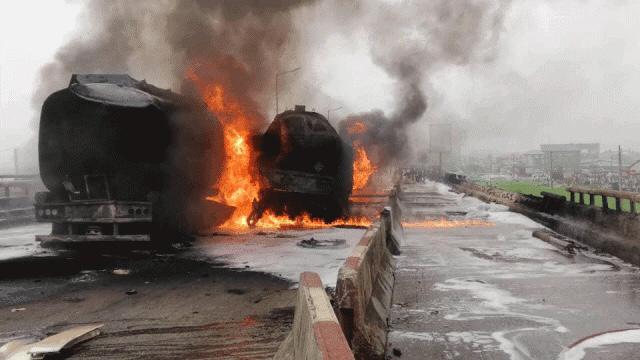 Several people, including students were killed on Wednesday, September 23 after a petrol tanker exploded in Felele, along the Lokoja-Abuja Highway.

The victims of the tanker explosion include school children who were on their way to school, Kogi State polytechnic students and many residents of the area.

An eyewitness gave information that the fuel tanker collided with another moving vehicle thereby leading to an explosion.

The Nation reported that the situation worsened as other incoming vehicles ran into the inferno, which resulted in the destruction of not less than 10 cars.

Staff of the Federal Road Safety Corps(FRSC) shut down the major road temporarily to avoid any further damage.

A lot of damages had already been done before firefighters and workers of the Federal Road Safety Corps(FRSC) arrived at the scene to quench the flames.

What is your opinion on the safety of Nigeria roads? Feel free to join the discussion in the comment section below.

BBNaija Reunion: Why I had oral sex with Brighto – Dorathy

LAUTECH professor slumps and dies while praying in Ogbomoso

10 proven tips for a healthy lifestyle

King of Boys: The Return of the King (Complete Season)