ATTENTION 🚨🚨(READ ME!!) CLOSE ALL ADS POPPING UP TO DOWNLOAD MOVIES FOR FREE...IF YOU ARE REDIRECTED, CLOSE THE TAB TO CONTINUE WHERE YOU STOPPED

Nigerian singer, Olakira has reacted to rumours that he is the brother to controversial pastor, Evangelist Funmilayo Adebayo, popularly Known as Mummy G.O.

Reports made the rounds on Friday that Mummy GO is a sister to Olakira, who sang ‘In my Maserati’.

This stirred reactions online as some mocked him, saying he’ll go to hell.

Responding, Olakira confirmed that Mummy GO is his sister and he’s not going to hell.

His tweet read: “Yes she is my sister and na heaven I Dey go.”

In recent weeks, Nigerians have been startled by prophecies and doctrines by Mummy GO about things that will make everyone go to hell fire.

In one of her viral preachings, she revealed that she was an executive/super agent of the highest form of darkness with lucifer and had sold guns, pushed cocaine with fly-carpet before she got born again.

She mentioned that God called her to preach to people of the world to focus on heaven but people hate her because she says secret things people don’t like to hear that will make them miss heaven.

In one of her viral videos, she said those who want to become superstars should forget about heaven.

Mummy GO also called out circular and gospel artistes Frank Edwards, Tope Alabi, Tiwa Savage, Tonto Dikeh in some of her videos with their dance steps and for “dressing as ungodly.”

She, however, said that some of the preachings online are edited by those threatening her. 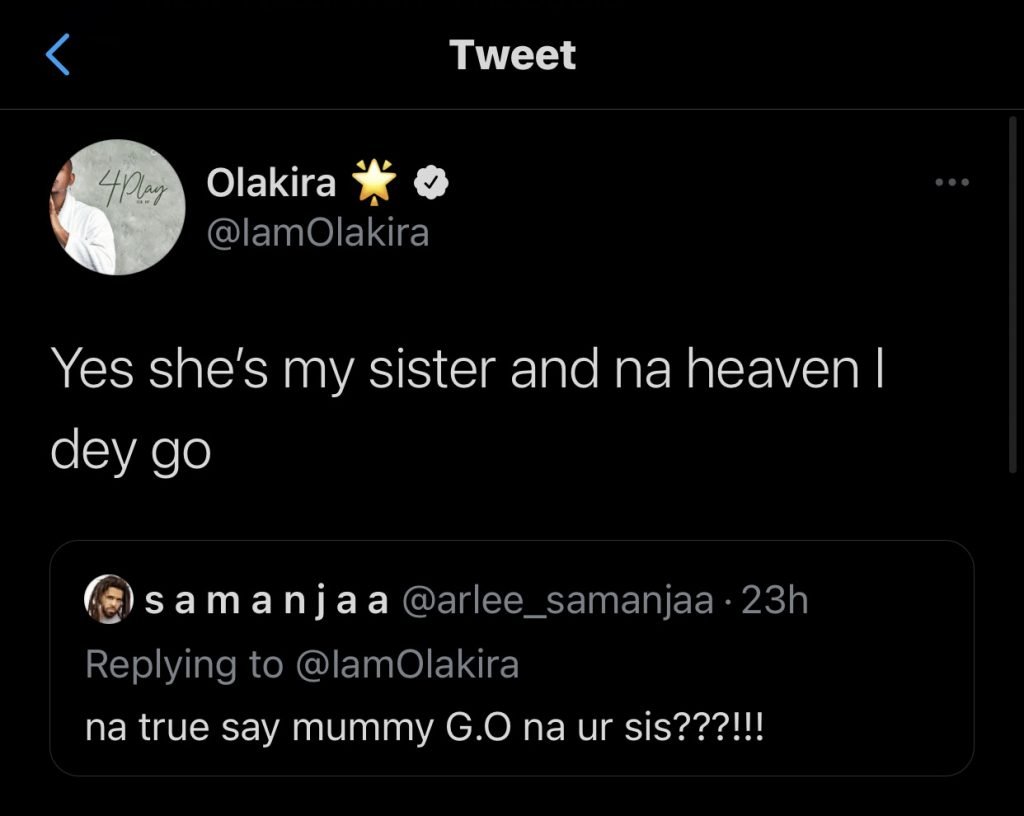 ATTENTION 🚨🚨(READ ME!!) CLOSE ALL ADS POPPING UP TO DOWNLOAD MOVIES FOR FREE...IF YOU ARE REDIRECTED, CLOSE THE TAB TO CONTINUE WHERE YOU STOPPED
AD
Comments Off on Mummy GO is my sister – Singer, Olakira confirms