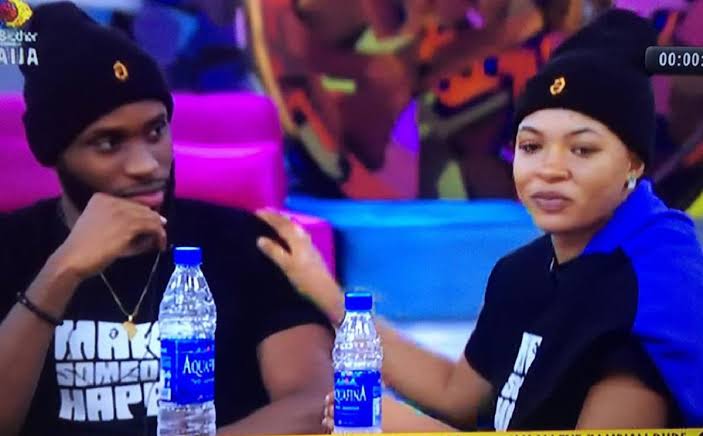 Liquorose told Emmanuel she wanted sex and in a controversial statement used a word that sounds like ‘rape’ to many. Watch the video below:

Liquorose, whose popularity as a dancer gave her a huge advantage, has been in a relationship dilemma with Emmanuel since she stepped into the house.

Their relation”ship” called Emmarose by fans has been a ship that keeps sinking and reviving.

Some housemates have stated that Liquorose is head over heels for Emmanuel though he is not interested in her. This is an assertion she has refused to accept.

She got into a brawl with Angel and Beatrice after overhearing them talk about her and Emmanuel.

Yesterday, after their jacuzzi night, a tipsy Liquorose told Emmanuel she wanted sex with him. In expressing her desires she seemed to use the word ‘rape’ or something that is being mistaken as it. Rape is a strong word and fans are disappointed in her comment. If Emmanuel had said such, people would have been asking for his disqualification.

Emmanuel first approached Liquorose and has had a crush on her even before the show, as there are proofs of him commenting on her Instagram posts way before BBNaija S6.

However, it seems Liquorose is now more into the EmmaRose ship than Emmanuel. Though Emmanuel nominated her as the wildcard which could have led to her eviction, she is still stuck with him. Is it for his looks, the game, or love? Time will tell.

Fans of the dancer have been hoping she will forget about Emmanuel and concentrate on the game. However, that will not be happening soon. Hopefully, Emmarose will not be another Pribaj situation.

This is good news for the shippers as their EmmaRose ship appears to be sailing again.