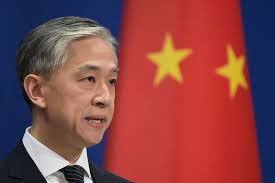 China Finally congratulated Joe Biden and Kamala Harris on winning the U.S. Presidential Election after days of silence to acknowledge the victory.

Beijing’s salutations came after Biden’s team said he’d had phone calls with Australia, Japan and South Korea, US Allies that have watched with concern as Beijing expanded its area of influence.

The early overtures to China’s neighbours—especially Japan—reflected Biden’s campaign promise of staying tough on China but seeking a united front instead of Trump’s more prejudiced approach.

“We have been following the reaction on the US Presidential Election from both within the Unites States and from the international community,” Chinese Foreign Ministry spokesman Wang Wenbin told a briefing in Beijing on Friday.”

“We respect the American people’s choice and extend congratulations to Mr. Biden and Ms. Harris. We understand that the result of the US Presidential election will be determined following the US Laws and Procedures,” Wang said.

China’s Foreign Ministry had previously held-off congratulations saying that they only “noted” Biden’s claim of victory. Chinese foreign policy analysts explained that stance has a precautionary one, because president Trump had not conceded.

The acknowledgement came just after Biden defeated Donald Trump in Arizona, one of the battleground states.

China was previously among major countries, including Russia, Brazil, and Mexico, that had not congratulated the President-elect as they were waiting for votes to be confirmed by the US Electoral College next month.

Steve Tsang, the director of the SOAS institute in London said, “More likely, no one in the Chinese government dared to make a call on this until they’d heard from [Chinese leader] X- Jinping on how Xi would like to play it. Xi took time to think about it and finally decided to reach out to Biden, after allowing the confusion in Washington to be known to the Chinese.”

Meanwhile, Kremlin spokesperson Dmitry Pskov stated on Monday, “We believe it is correct to wait for the official results of the elections to be announced.”

“Our Jesus Story” to Hit Cinemas on Friday December 11.

“Move before it’s too late!” Twitter users warn after woman moved into a house and found the head of a doll stuck in her basement wall.